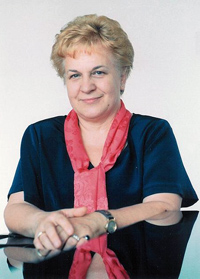 Enza Ferrari was born in Milan where, at age fifteen, she received her Diploma in Piano Studies from the “Giuseppe Verdi” Conservatory. She graduated in Composition from the same institution a few years later. She has also studied Orchestral Direction under the mentorship of Maestro Antonino Votto. She received five grants from the City of Milan and three other endowments from the Project “Vacanze Musicali” in Venice. She worked as Assistant Instructor for Professor Maria Carbone in Vocal studies at the same “Verdi” Conservatory and at the Liceo Musicale “Viotti” in Vercelli. In 1959 Ferrari received the “Giovani Concertisti” Prize in Riva del Garda.

From 1966 to 1970 she was the Substitute Maestro at the Teatro Massimo in Palermo, Sicily. She was the official piano accompanist of the National Award for cello and violin “Vittorio Veneto” from the year of its founding till 1982. From 1971 to 1998 she was the primary piano accompanist of International Singing Competition “Toti Dal Monte” of Teatro Comunale of Treviso, and coordinated the “Bottega” project that was directed by Maestro Peter Maag. During the past twenty years she has collaborated with important Italian singing contests, such as Adria, Siena, Vercelli, Gorizia, plus the International Chamber Music Prize of Conegliano Veneto.

Ferrari taught in Saint Vincent during the summer sessions of the “Vacanze Musicali,” and as Opera instructor for the Tuscan city of Barga. From 1970 to 1974 she taught in Milan at the Training Center of the Teatro Alla Scala, and piano studies at the Scuola Civica di Musica (till 1975). After that engagement she collaborated with the “Benedetto Marcello” Conservatory of Music in Venice. She has coordinated and taught the Summer Program for young American singers organized by the EPCASO Foundation in collaboration with Pittsburgh Duquesne University.

In 1987 she was on the judging committee for the prizes “Citta’ di Porcia” for young performers, and the “Citta’ di Treviso” for piano performance. Enza Ferrari taught in various American colleges and has collaborated with important Italian theaters, especially the Teatro Comunale of Florence and the Teatro Alla Scala in Milan. From 1977 to 2006 she is the Artistic Director of the “Manzato” Musical Institute of Treviso. In 1992 she directed a proficiency course on Italian Lyrical Opera Repertoire in Japan. On behalf of CIDIM she supervised the performance of the “Farse Rossiniane” staged by the National Theater of Prague. From 1994 to 1999 she collaborated with the Sao Carlo Theater of Lisbon and the Macau International Music Festival. Since 2000 she has been the consultant at the Institute of Chinese Culture in Macau for the organization of the Music Festival. Since 1993 she has been work with the Hong Kong University for Performing Arts.

Between 1995 and 2001 she taught classes at the Lyrical and Choral Academy of the City of Osimo, Italy. From 1993 to 1995 she served as Artistic Director for the Teatro Comunale “Giuseppe Verdi” of Lonigo, and collaborated with the Slovenian National Theaters of Lubjana and Maribor. Since 1999 she coached interpretation and vocal technique in New York, and courses in performance of Italian lyrical repertoire in Madrid. In 2002 she was chosen by the Real Theater in Madrid as consultant for all Italian repertoire productions. In the 2005 she is back at the Accademy of La Scala Opera House to teach the Italian repertoire at the young pianists of the Academy. Since the 2010 she works with the Oficina de Música de Curitiba and with the Conservatory of Music of the University of Cincinnati Her work and performances have been broadcasted and documented by radio and television stations in Italy, Austria, Belgium, France, Germany, the Netherlands, Spain, Switzerland, and Mexico.